Simple scenario I want to send an email Notification from my BPM process informing a customer that her order has been approved.

I am using JAMES for this simple scenario –

I created the users –

I created a new BPM app in JDev and included the following myOrders.xsd

Create a Process Data Object v_order, based on the Order type.

• Add a BPEL process to the composite

• So we can delete the BPEL process

Posted by Niall Commiskey at 4:00 AM No comments:

My esteemed colleague Angelo and I got this example together...

We thought up the following simple scenario -
An order is passed on to a Salesperson for approval.
However, the customer can cancel the order while it is in flight.

So essentially we need to cancel a running BPM process based on an event -
So while our BPM process is doing it's thing, we also want to "listen" for any relevant "cancel" messages.

We created a simple BPM app that included a User task to approve the order.
The BPM app will also start an instance of the listening BPEL process.

The BPM app will also contain an event handler that listens for a cancellation message from BPEL.

The simple BPEL process that will listen for cancellations -

We amended the BPEL wsdl to define the "cancelMsg" type and also included 2 new operations for the cancel - 1. to "receive the cancel", the other to do the cancel callback.

We created a correlation set on the Receive activity.
This is also leveraged by the OnMessage, which captures the cancellation and does the required callback.

Full doc and JDev project at -

https://docs.google.com/leaf?id=0B7YrnfO7h717ZDNjYTZmYWUtMDAxMy00MDIxLWExOGYtMWY0YzI5MWQxMzVi&hl=en&authkey=CIaZwMQL
Posted by Niall Commiskey at 10:44 PM No comments: 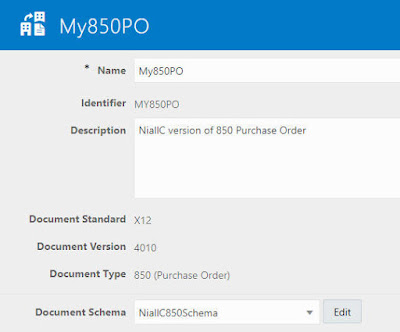